In our modern society, laws exist to regulate the actions of parties that harm others in our society, but it’s important to understand that the existence of a law and the enforcement of the same law are two very different concepts.

Building off this idea of ensuring the enforcement of existing laws, how can we take this one step further and apply it to environmental damages?

How would one take this to the next level when referring to violations that affect a larger number of people, from climate change to health-related violations?

In particular, when it comes to environmental law in the US, its roots can be traced back to common law doctrines, such as the law of nuisance and the public trust doctrine.  Even though there have been multiple precedents of environmental cases that deemed the ‘offense, annoyance, trouble or injury other parties’ punishable under the law of nuisance, many environmental injuries are left unresolved. The reason many injuries/crimes don’t go punished is that the victims don’t understand they are actually victims of another party’s wrongdoings and if they do know, they often can’t afford lawyers to defend their rights.  When lawyers can’t be afforded but the evidence is present, as a society we should ensure that the law should prevail; therefore we must look at mechanisms to fund the legal argument of the wronged parties.

I’ve outlined a framework below that highlights how we can approach a more comprehensive approach to enforcing environmental justice. 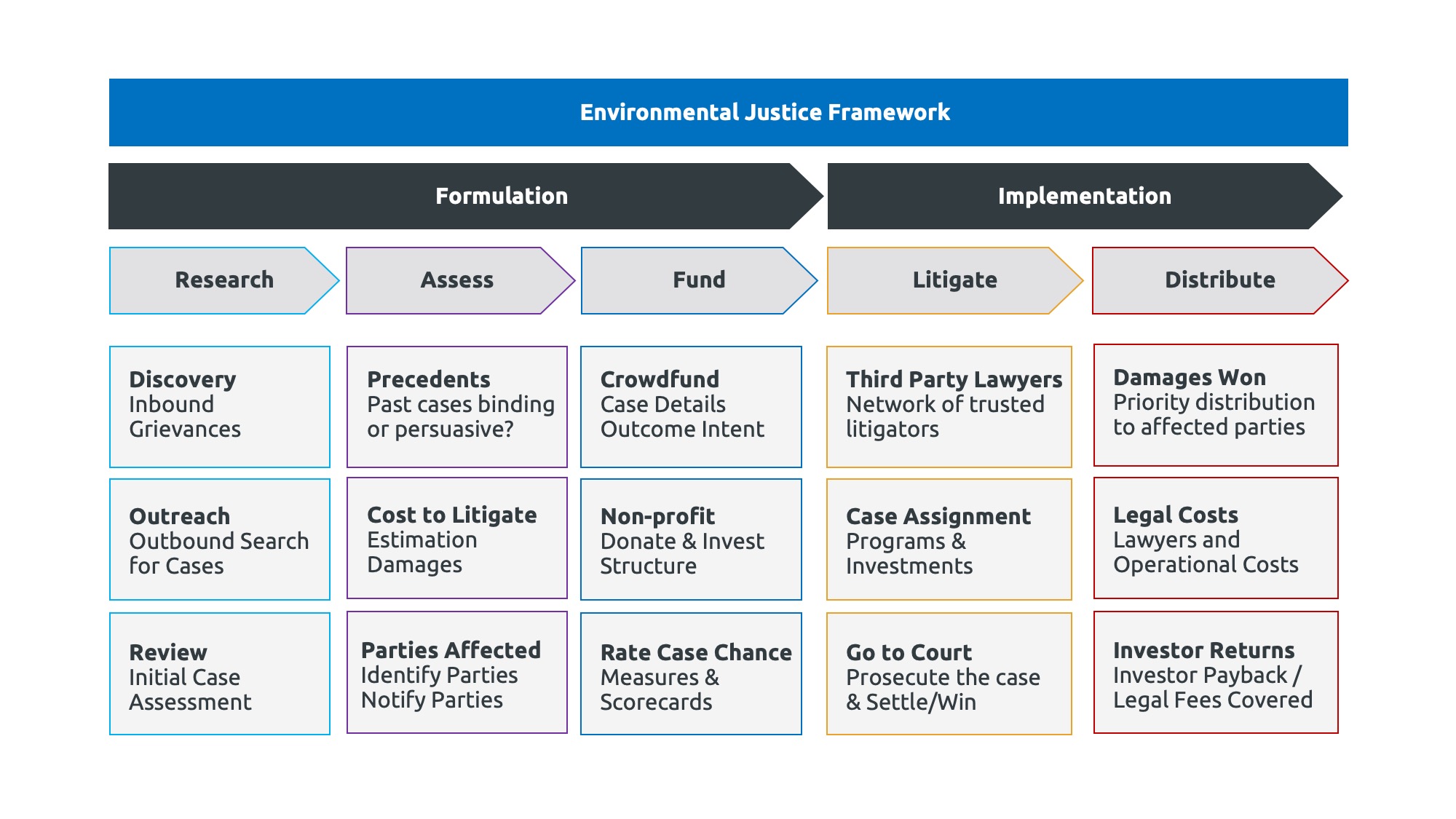 Research – At this stage in the process, it’s where the Discovery, Outreach, and Review of potential cases are identified.  Whether it’s an inbound message from an injured party or the latest news of an environmental dumping scandal in a rural community, there is a need to identify the potential cases out there. This can be done via crowdsourcing with scouts as well as regular inbound capture under a specific brand name. (As in developing a “go-to name” for environmental injuries and litigation)

Assess – Once the potential cases to litigate have been identified, it will be time to assess their potential and the strength of the case.  Looking at past precedent, estimate costs to litigate, damages, and identifying all the parties affected (especially in cases of a class action or Medical Monitoring requirements).  By applying Machine Learning algorithms to review past precedent of environmental cases that successfully awarded damages, the ML component can sort the identified cases into a simple rating/assessment of how strong the case is.  A paralegal team would then review the highest-rated cases before engaging in further due diligence to understand the impact/parties and costs of litigating the case.

Fund – Now that a case has been identified to litigate, it’s time to be creative with the funding mechanism, and deploy hybrid crowdfunding/investing mechanisms to ensure adequate funds exist to pursue this case.  A dual structure would be designed similar to Social Finance Inc. precedent of “Social Impact Partnerships” (outlined in more detail below).

The idea is for investors to invest in a non-profit fund to support a certain cause, similar to how GoFundMe and Choose.org donations work, but with the potential of upside.  Each individual case will have its own investment risk rating and confidence of success based on past precedent and similarity to other cases won.  Individual investors would invest in each non-profit limited partnership as they would any donation to a non-profit but there is a potential upside if the case is won.  In an ideal scenario, we work out the non-profit status of each Limited Partnership to enable tax deductions, therefore it can be beneficial for investors to support almost all cases to investors who can afford it.

Litigate – With legal research completed and funding raised, it’s time to prosecute those organizations that have harmed the environment/communities where the law has been violated.  There are a growing number of law firms that litigate the companies responsible for environmental damages, but for now, the norm is that it’s lucrative to protect those parties. It’s important to identify certain firms and lawyers that believe in what this framework wants to achieve and develop a legal network distributed across the United States & the rest of the globe.

Distribute – Assuming a case is won, the damages and ‘profit’ for risking such a legal undertaking would need to be distributed.  There would need to be a prioritization of ensuring the original intent of helping the affected parties first and then compensating the law firm that undertook this task, as well as the investors who took the risk with their capital.

So how does this all come together?

I have put together some more detailed points about how the Formulation and Implementation phases of this framework could work based on past precedent and existing examples of similar case studies.

Law firms such as White & Case are looking at litigating for climate change action, the opportunity is outlined in their White paper, although it should also be noted that as a law firm, White & Case’s climate change scorecard is rather lacking. The 2020 Law Firm Climate Change Scorecard analyzes litigation, transactional, and lobbying work conducted by the 2020 Vault Law 100 law firms—the 100 most prestigious law firms in the United States—from 2015 to 2019. Each firm receives an overall Climate Score reflecting its contribution to the climate crisis based on the data in these three categories. 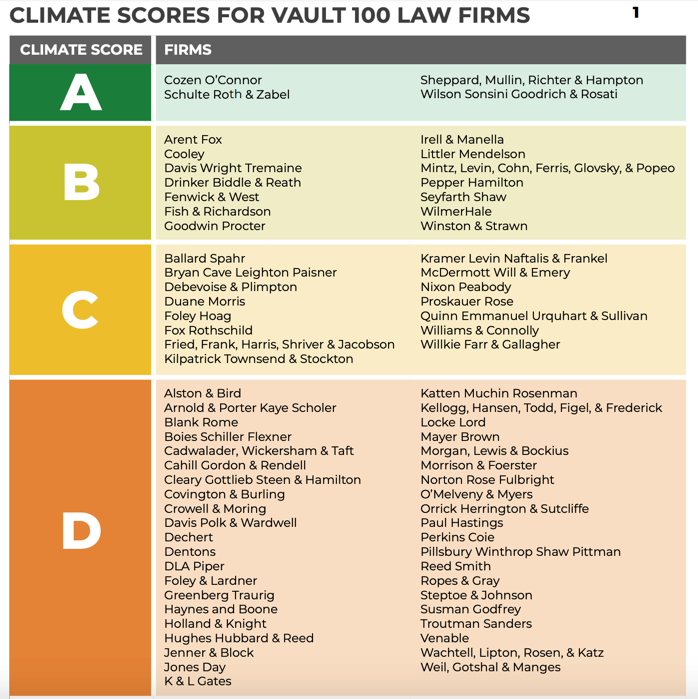 It’s clearly more lucrative (currently) to be on the side of the fossil fuel industry, therefore we need to enable a mechanism to make climate justice as lucrative for law firms to litigate for the mitigation of environmental harm.  The proposed Environmental Justice Framework would enable a new outlet for lawyers & law firms who believe in environmental justice.  There is also potential to tap into a familiar concept within the legal ecosystem… pro bono publico (with an environmental focus twist).

Back to the funding of such climate change cases, according to the California Bar in regards to a third-party funder to lawyer relationship, The State Bar of California standing committee on professional responsibility and conduct formal opinion interim no. 14-0002 Alternative Litigation Funding mentioned,

“Finally, throughout the litigation, Lawyer must not allow the relationship with funder to impair Lawyer’s objectivity and loyalty to Client. The fact pattern notes that Funder is in frequent contact with Lawyer whereas the Client is busy running its business. Lawyer must remain cognizant that the company is the client, not the funder.”

GoFundMe also offers some fundamentals on using crowdfunding for legal cases, but nothing of this scale has been done before to continuously pursue environmental justice cases, let alone make it systematic and bridging the ML and crowdfunding world.

In case, it comes to a matter of crowdfunding amount each individual can contribute, the SEC recently amended the ‘crowdfunding rule’ and upped the maximum cap on the amount of money that can be raised via crowdfunding.  (Caveat: we would need to dig deeper into how that can be applied to a hybrid non-profit / investing scheme such as Social Finance Inc. does it but with a more open/transparent crowdfunding channel).

According to Liam O’Neil, head of markets group at Bank of America Merrill Lynch, “We call them social impact partnerships because they closely resemble limited partnerships. The investors could lose their money but they also could earn money on their investment.”

These investment programs are often mistakenly called social impact bonds. “These are absolutely not bonds,” O’Neil says. “We call them social impact partnerships because they closely resemble limited partnerships. The investors could lose their money but they also could earn money on their investment. But investors do not do it for the revenue first. They do it because it reflects their values. When they get their money back, they probably will invest again,” O’Neil adds. “We are trying to access private capital and individual investors to mobilize a pool of capital not previously engaged in this type of activity.” (Source)

The Problem Cases to Target

The Flint Michigan water crisis is a great example of environmental injustice that went on for decades, we often listen to the stories of what happened and how various entrepreneurs are working to repair/solve the damage, but the perpetrators of this injustice have avoided any real consequences for their actions.

“For more than a century, the Flint River, which flows through the heart of town, has served as an unofficial waste disposal site for treated and untreated refuse from the many local industries that have sprouted along its shores, from carriage and car factories to meatpacking plants and lumber and paper mills. The waterway has also received raw sewage from the city’s waste treatment plant, agricultural and urban runoff, and toxics from leaching landfills. Not surprisingly, the Flint River is rumored to have caught fire—twice.” – Flint Water Crisis, Everything you Need to Know

Forever chemicals and ‘unofficial waste disposal’ contribute to a hidden cost on our healthcare system, and environmental cleanup costs are often evaded by the responsible parties.

For those familiar with Rob Billott and his case against DuPont (highly recommend reading the NYTimes article on his story, and the movie based on the case); he went after DuPont and their usage of PFOA, but there are over 600 Forever Chemicals in existence and used in a variety of products that have harmful effects on the human body.  This case has set a precedent on how to pursue these corporations that put profit over people and the planet; the time has come for this to change.

The LA Times also recently highlighted a recent discovery of how the waters off Catalina became a DDT dumping ground.

The Environmental Working Group published a map of over 2,230 sites in the United States that PFAS contamination has occurred. Since PFAS is a manmade chemical there is an actor behind this contamination and most likely there are several parties affected by each of these contamination sites.

It’s time to flip this script, with the new environmental justice model.

Not just Local, but Global (with Precedent)

In Australia, class-action suits have been filed in regards to climate change on the front of failure to disclose the risks.

“Ms. O’Donnell, 23, is leading a class-action lawsuit filed on Wednesday that accuses the Australian government of failing to disclose the material risks of climate change to those investing in government bonds.“ – Australian Student Sues Government Over Financial Risks of Climate Change

Depending on how such cases go, there might be opportunities to pursue similar cases.  Recent evidence has come to light that oil companies (Exxon and Shell) have also known since the 1980s of the problems caused by their products. So we might not have gone towards carbon market/pricing yet, but climate litigation might be a way to regulate the markets.

As I continue exploring the possibilities, I am looking to potentially support a group of like-minded individuals who think they can bring this framework to reality. Or at the least objectively critique the idea on how to adjust/adapt (or even scrap) it entirely.  Get in touch with me if you would like to discuss this further.